The History of Silk

Silk, one of the oldest fibers known to man, is called the “queen of the fabrics.” Before buying your silk bedding please take a moment to think about the fabric’s impressive millennia-old history.

Legend written by Confucius says that silk was discovered around 2700 BC in ancient China.

The Chinese Empress Leizu (also known as Xi Ling Shi) discovered silk by accident when a silkworm cocoon dropped into her cup of tea from Mulberry tree. When Leizu lifted the cocoon from her teacup, the cocoon began to unravel. Leizu noticed that the cocoon was made out of a single long strand of silk, and she had the idea of weaving this fine thread into a piece of fabric. Empress Leizu shared her discovery with her husband, the Yellow Emperor Huangdi.

Leizu persuaded her husband to gift her a grove of Mulberry trees to farm silkworms in as Mulberry leaves are their primary source of food. Domesticated silkworms, also called Bombyx Mori in Latin, are a species native to China. She learned a lot by studying silkworms and Mulberry trees around her. Empress Leizu was also said to have invented the silk reel, a device used to spin the silk fibers from multiple cocoons together into one thread, and the silk loom, a tool used to weave silk.

While we have no evidence of the fairytale-like story of silk’s discovery, archeologists did confirm that silk and sericulture (Sericulture, or silk farming, is the cultivation of silkworms to produce silk) were first found in ancient China. Silk fabrics were found dating back hundreds of years before Leizu alleged discovery of silk.

The first silk cocoon that was cut in half using a knife by humankind was found in Northern China in the Shanxi province. While the exact age of this cocoon is unknown, it is believed to be from the period between 4000 and 3000 BC.

The first woven silk cloth was also found in China and dates back to the year 3630 BC. The silk fabric was used to wrap the body of a child.

Other than actual fragments of silk, archeologists in China have also found written references to silk, as well as objects adorned with images of silk. This includes an ivory cup with carvings of a silkworm design, dating back between 6000 and 7000 years.

To this day, 95% of the silk produced in the world is still derived from the same species of silkworm that made the cocoon found in Shanxi. However, now the Bombyx Mori silkworm no longer lives in the wild. The species has become completely domesticated after thousands of years of silk farming.

The First Uses of Silk

The creation of silk fabrics requires a lot of labor and resources, so silk was precious and valuable.

At first, only the Emperor, his close family, and high ranking military officials were allowed to wear silk garments. However, these rules were later relaxed during the Qing Dynasty. After the Qing Dynasty, anyone was allowed to wear silk clothing. In reality, you were unlikely to see most people of society’s lower classes wearing silk, as it remained a costly fabric.

Silk was so valuable in ancient China that for a while, it was even used as a currency. During the Han dynasty, government employees were paid their salaries in silk, and farmers had to pay their taxes in grain and silk. At the time, the price of something could be described in the lengths of silk as a unit of measurement.

Because silk is one of nature’s strongest natural fibers, it was deemed useful for many things other than fabric making. Silk was also used for strings of musical instruments and bows, as well as fishing lines. Silk cloth was even used as paper before the Chinese invented and spread the paper we know today.

Silk and Its Role in The Silk Road

The strong interest other countries showed in China’s silk was one of the contributing causes to the opening of The Silk Road some 200 years AD.

China was then isolated from the West by toughest mountain and desert landscapes. The Silk Road was born when the Han government sent one of their generals West of China to establish trade relationships with foreign states. The road stretched over 6,000 kilometres, all the way from Eastern China to the Mediterranean Sea and was once the longest and most flourishing trade route in the world.

At the time, silk was one of the most valuable goods China had to offer. It was even considered to be more expensive than gold. 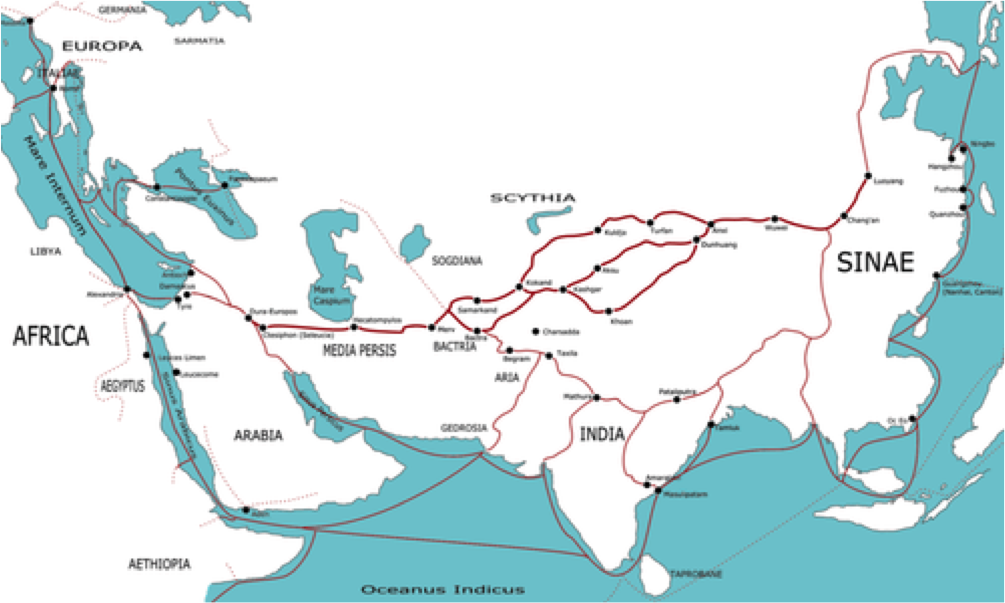 The Silk Road continued to contribute to the development of many major ancient societies until sea trade became more popular in the late Middle Ages. At this point, many countries had already learned how to produce their own silk.

The Spread of Silk Farming

Silk-Making in the Middle East

The Chinese realized the value of the beautiful material they were producing and kept its secret safe from the rest of the world for more than 30 centuries. They even enforced a ban on the transport of silkworms and their eggs to other countries. Anyone who disobeyed this ban could be faced with the death penalty.

It was not until much later that the secrets of silk production left China. It is said that the Byzantine emperor hired monks to smuggle silkworm eggs out of China in 500 AD from China to Constantinople. The monks were also said to bring along knowledge of sericulture. Just like the Chinese, the Byzantines aimed to keep a monopoly on silk production after learning this precious art.

However, it was said that Chinese silk was still superior in quality when compared to Byzantian silk. Thanks to its superior quality, Chinese silk remained popular despite the appearance of some healthy competition. After hundreds of years around 630 AD, the Byzantines lost their monopoly on sericulture in their region. This was when the Arabs conquered Persia, where they discovered how to make silk.

The ancient civilization of Rome loved wearing silk garments, and silk fashion was especially popular among society’s rich and politically powerful. Before silk-making became widespread, residents obtained silk by trading with China through the Silk Route. In Medieval Europe, silk was used only by the nobility.

It took a while for other countries in the West to discover sericulture. It was not until the High Middle Ages that Andalusia in Spain and Venice in Italy took the lead in Europe’s silk-making scene. During this time, around the year 1100, travelers from Constantinople set up their silk-making business in Italy. Today the Como region in Italy is still renowned for its silk-making.

By the 13th century, however, Italy had gained dominance and entered the hall of fame in silk history. Venetian merchants traded extensively in silk and encouraged silk growers to settle in Italy. Even now, silk processed (finished, dyed, printed) in the province of Como enjoys an esteemed reputation.

Italian silk was so popular in Europe that Francis I of France invited Italian silk makers to France to create a French silk industry, especially in Lyon. By the 17th century France was challenging Italy’s leadership, and the silk looms established in the Lyons area at that time are still famous today for the unique beauty of their weaving.

Back in East Asia, the Japanese also managed to obtain silkworm eggs and

to learn the art of silk farming around 300 AD. Silk became very popular in Japan as one of the main fabrics used in the making of kimonos. Japan would later become one of the world’s largest silk producers, after China.

Decline in the European silk industry started in 1845 with first silkworm diseases which increased the price of silkworm cocoons. Fashion also changed and importance of silk in the garments of the bourgeoisie declined. With crisis in Europe Japan became world’s greatest producer of silk which lasted until the World war Two.

Other than a few technological advances to speed up the production process, silk today is still roughly produced the same way as it was thousands of years ago.

After millennia of experience in silk-making, China remains the largest producer of silk in the world, with an output of 150,000 metric tons of silk a year. 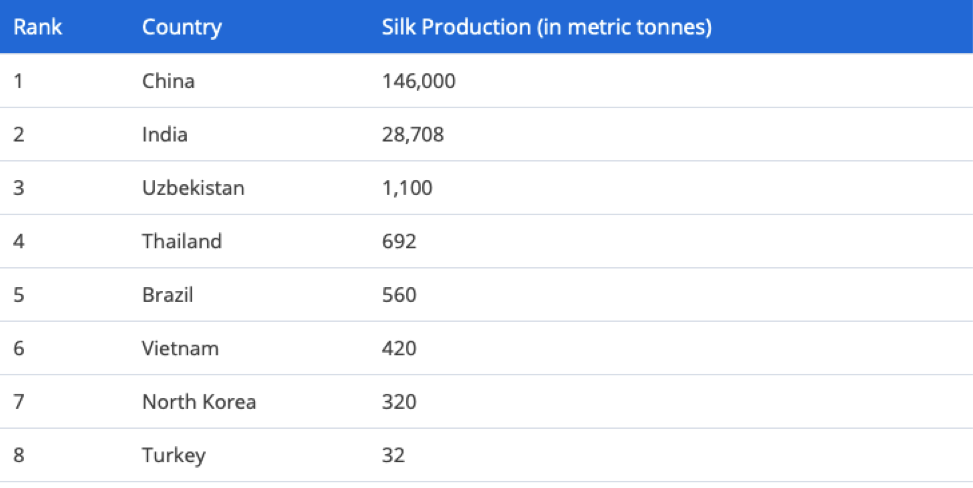 We use cookies on our website to give you the most relevant experience by remembering your preferences and repeat visits. By clicking “Accept”, you consent to the use of ALL the cookies.
Cookie settingsACCEPT
Manage consent

Any cookies that may not be particularly necessary for the website to function and is used specifically to collect user personal data via analytics, ads, other embedded contents are termed as non-necessary cookies. It is mandatory to procure user consent prior to running these cookies on your website.